With publication of the Payment Card Security Data Security Standard version 3.2 the PCI Security Standards Council retires the three-year life cycle of one of its main publications. In the future smaller, but more frequent changes are likely.
Version 3.2 is effective immediately and can be used for validation activities upon its publication. The previous version 3.1 of the PCI DSS is valid until October 31, 2016. All validations against this version of the standard must be completed by this time. Beginning with November 1, 2016 all validations must be performed against PCI DSS version 3.2.

We prepared a whitepaper containg all relevante information about the changes and the newly introduced requirements. You can download the whitepaper here. 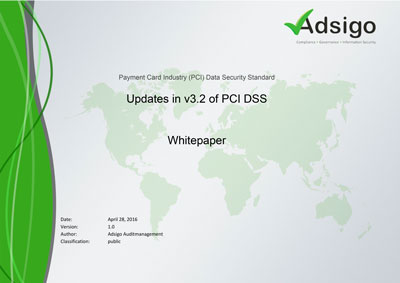 Please contact us directly if you are interested in our WebEx seminars to learn more about PCI DSS v3.2.

Troy Leach, Chief Technology Officer from the PCI Council published their information in this blog about key changes in the standard and how PCI DSS 3.2 helps strengthen payment security programs. Read details here:

external link to the blog from the PCI Council

Press release from the PCI Council about the new Version 3.2

external link to the press release